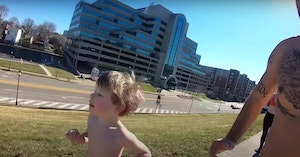 A YouTube-focused family is facing backlash after bribing their 6-year-old to run a marathon with them, something even Olympic athletes are saying was the wrong call.

Ben and Kami Crawford frequently include their six children while chronicling their lives online, sharing parenting videos, and even hiking the whole Appalachian Trail. Earlier this year, they started sharing videos of their 6-year-old, Rainer, training for a marathon, with one video boasting that he could run six miles “no problem.”

All this was a precursor to the Flying Pig Marathon, a 26.2 mile race that takes place in Cincinnati, Ohio, annually. Although the minimum age limit to compete in the full marathon is 18, organizers allowed the family to compete — a decision they may now have come to regret.

While the family praised Rainer on social media for finishing the race, they admitted “he was struggling physically and wanted to take a break and sit every three minutes.”

He had been looking forward to the race organizers handing out Pringles at mile 20, but took so long to reach that point that when they did, seven hours after starting the race, the table was empty.

“He was crying and we were moving slow so I told him I’d buy him two sleeves if he kept moving. I had to promise him another sleeve to get him in the family pic at the finish line,” reads an Instagram post. Rainer ultimately completed the marathon in 8.5 hours.

People condemned the parents for pushing a 6-year-old to this extremes, even though they insist he was the one who initially begged to be included.

Olympian runner Kara Goucher was among those who took to social media to explain why this wasn’t okay.

“A six year old who is ‘struggling physically’ does not realize they have the right to stop and should,” she wrote. “Children are children. Let them run around, but as the parent you need to protect their growing bodies and their young minds.”

And she was far from the only person to take issue with what happened.

The race organizers have also been called into question for not only allowing, but seemingly encouraging the YouTube family.

The Crawfords themselves have also pushed back against criticisms.

They claimed that they have never forced any of their children to run a marathon and insisted that they would have stopped Rainer from continuing if it seemed as if he was in actual physical danger.

“We have hours of video footage and images that will be released that depict his emotional state very clearly,” they wrote as part of a lengthy post about the race, as if that in and of itself isn’t weird and creepy parenting anyway.

But one commenter put it pretty plainly with this reply: “6 year olds want to do a lot of things. Good parenting is saying ‘NO’ or at least modifying the desired activity.”