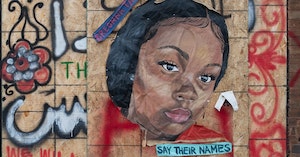 Photo via Sharon Mollerus/Flickr (CC BY 2.0)

Zero Direct Charges In The Death Of Breonna Taylor, One Officer Charged For Shooting Into Nearby Apartments

After six months of protest over the police killing of Breonna Taylor, Kentucky Attorney General Daniel Cameron announced that only one officer will face any charges related to the fatal shooting, and only for firing “blindly” into neighboring apartments. The charge against former Louisville officer Brett Hankison, who was fired for the same reason, is for wanton endangerment, which is a class D felony if found to be in the first degree.

No charges were filed against the other two officers who have been targeted by protesters, Sgt. John Mattingly and Det. Myles Cosgrove.

The announcement comes shortly after a state of emergency was declared in Louisville, the city where Taylor was living and sleeping when she was killed, and city police officers were temporarily banned from taking any days off. This news led to widespread speculation that an announcement on the case was imminent and that it would anger those who have been calling for the arrest of the three officers.

Cameron called the police killing of Taylor a “a gut-wrenching emotional case” and a “tragedy” during the press conference but stressed that “the rule of law must apply.”

“The success of our legal system is predicated upon the principle that the accused is innocent until proven guilty, despite passions, opinions and desire for every detail to be known,” he said.

Taylor was killed during a no-knock raid of her apartment as police searched for a suspect who did not live there and who was already in police custody at the time of the raid. The 26-year-old EMT was asleep when officers arrived.

In response to the news, protests have already begun in Louisville.

In addition to the state of emergency declaration, Louisville Mayor Greg Fischer has imposed a 72-hour countywide curfew beginning at 9 PM and has activated the national guard. Police have set up barricades restricting traffic into downtown and certain federal buildings have close for the week.

In spite of Fischer’s call for “a peaceful, lawful response,” violence is widely expected tonight as people rail against this pattern of police killings of Black civilians with no accountability or justice.