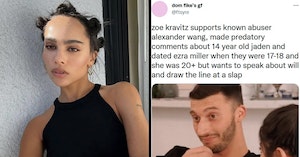 Actress and singer Zoë Kravitz may be regretting wading into the debate over Will Smith slapping Chris Rock on stage at the Oscars Sunday night after a joke targeting Jada Pinkett Smith’s hair as a Black woman with alopecia didn’t sit well. Kravitz, along with many other celebrities, was upset about the incident, posting two photos on Instagram that indicated she felt the physical act to be inappropriate.

However, following these complaints, supporters of Will Smith and his slap dug up an interview from 2013 containing comments from Kravitz that could also easily be described as inappropriate. In fact, during the V Magazine interview, Kravitz herself admitted that she was being inappropriate about Will’s son, Jaden Smith, who was 14 at the time while the actress was 24.

“There were moments that I was hanging out with Jaden and thinking, I can’t believe you’re 14, I have to check myself, like what I say to you,” she said. “He has so much personality and so much swag, he is so much cooler than I am. And he’s so handsome, I was always like, when you’re older, you know, we’ll hang out… Nope, that’s inappropriate, you’re 14.”

Those are the kinds of thoughts you should really keep in your head, not admit to in a public interview.

That was not the only time Kravitz publicly made comments about an underage Jaden that left people feeling creeped out. Two years later, during another interview that was caught on video, she referred to Jaden as her “date,” calling him “the love of my life.”

Additionally, people have brought up Kravitz’s friendship with fashion designer Alexander Wang, who faced a series of allegations of sexual assault by models, particularly trans women, as well as at least one accusation of drugging a person without their knowledge.

Kravitz is just one example of many celebrities who have spoken out against Will Smith’s actions Sunday night only to have their own histories of violence or generally gross behavior dug up and plastered all over social media, but she may be getting some of the worst burns right now.